The front wheels are just as expected. They are large, have tyre-like rubber, runs wheel on gravel, a bit weighty. I'm pretty sure the rim is made of aluminium. NB: as advertised, they do not come with ball bearings.

I bought the engines alone, I'm happy, the engines are quieter, the eraser can erase the roughness of the road, better grip, but some points can be improved as delivery time, customer communication, the design of the tire that vibrates at low speed, but I have filled the furrows of the tire to eliminate the unpleasant vibration at start-up and braking. Satisfied but Product to optimize

R
SKULLBOARD S2 Electric Skateboard R.R.
I am very happy with the board

I am very satisfied with the board, only the delivery time of over 6 weeks was very long and driving directions forwards and backwards are reversed.

quality can be improve, looking for more bigger diameter is like 125mm hub wheel in the future. more wider truck, and maybe can be use at double king pin truck for more versatile.

Very fast shipping food quality of wheels
I will buy from him again.
Hope to do business with you again.
Eric-israel

I've owned a few boards similar to this one, the Meepo 1.5 and Ownboard. Plus a few DIY I made in between those two. I love it so far, not really any complaints other than one or two small things. During my first ride, I'm not sure if it paired wrong but the remote is backwards. I have to put it into reverse to go forward and the opposite to go backwards. I did experience vibration at certain speeds but I knew about that before hand. While a lot of people complain about torque, I never had much of a problem with that. I only ride in the middle mode and while it takes an extra second or two to hit top speed, it's a smooth curve. It can move my big butt (215 pounds/97.5 KG) to 16-17 MPH without issues. I never went over a 5-8 grade hill but I can tell it starts to struggle if I take it at a dead stop. If I'm already moving, it just chugs along.

Not a huge fan of ship time, it took the full 2 weeks to get here. Most of my orders from China tend to get here in about half that time. Only thing that does worry me is I bought the Sanyo battery as I have the standard battery in my old board and I don't notice a big difference in distance per charge. My old Samsung 10S2P averages 6-7 miles on full charge. It could be the cold but I only get a little more than that with this one. My longest ride so far was about 9 miles before it keeps beeping. Loving the fact it has almost 0% sag. My old battery would slow down to a crawl within 6 or so miles. I never noticed a difference until with this one until the remote vibrates. That would be another complaint but minor. The remote doesn't seem to last long, I made it about a week before charging it again. Which at about 40 minutes a day, doesn't seem like much.

Well this is only my second e-board I'v ever owned but all i can say is epic...I have smashed it up hill, down hill, on grass, dirt roads (note: back wheels will drift out on loss surfes) over broken glass bottles jumped sidewalks taking it off road.... i have not ben easy on it at all want to see how far i can push it b4 it brakes.... seems to take as long to charge as my mobile phone dose if not quicker, now i don't now how fast it goes haven't tried it with a speed'o but with the way i ride my 2.5km trip to wrk only takes less then 10min it took 20-25min to walk that (note walking meant i could take short cuts so the distance would be shorter) i only problem if you can call it that is the wight really make it had to ghosty kick-flip but i didn't buy the board to do tricks on so no real problem...
I have Mad respect for this board

L
SKULLBOARD AIRLESS WHEELS L.P.
All I can say is Wow!

Purchased the wheel kit just over a week and a half ago. Got it yesterday! Found out after installation the forward/reverse setting was back to front today, after a msgs back and forth the problem was solved within just a few hours. Best customer service ever. As for the ride, pros are... smooth ride. Acceleration is not as bad as every one says! Smooth breaking and they look sweet.
Cons are.... Crap Hill climbing....no instructions with kit..... Need to explain how to wire the display. Other than that LOVE IT! 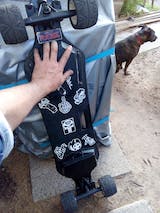 B
SKULLBOARD AIRLESS WHEELS B.G.
Game changer for me

These have greatly improved my ride enjoyment over the rough terrain I am faced with on my commutes. The improved traction in both dry and wet conditions gives me more confidence and I find them more comfortable than regular urethane wheels.

Pros: More comfort, more grip, rolls over tough terrain much easier, great price for what you get. The ESC/remote combo is a standout performer, with smooth power delivery and equally smooth braking performance.

Cons: Some vibration at certain speeds and will reduce your range, but the positives greatly outweigh the negatives.

Its well welded and strong for Andy dit build

i love it, wish i got it sooner 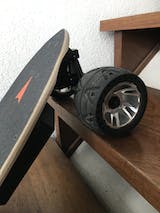 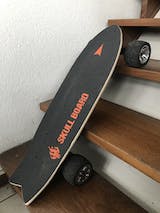 The company kept me efficiently updated of the shipping status and when I tried riding on the board it was really great What a great experience and it is so much fun skateboarding around my neighborhood and saving money by not using my car as often!!!

I can't believe it. It rained pretty hard today and I rode it to work and back not a problem my evolve board never would of made it this thing is bad ass. Going though water with the wheels all he way under water.

M
SKULLBOARD S2 Electric Skateboard M.H.
Great on so many levels, but...

This board gets so many things right that it really is a lot of fun to ride beside for one very large flaw, torque. The large rubber wheels and great deck design make it easily the most comfortable board to ride in a suburban setting that I've tried. The torque problem however is the difference between this being my favorite board and one that I enjoy. The slow acceleration speed and challenges with hills of any significant size are big strikes against an otherwise great board.

I think that the board is great for its money. It gets me to work every day and provides entertainment. Had for for about 2-3 weeks now and it's still going, however a few days ago I started to hear weird squeaks.
It's a great beginner board (which means it's great for me), but those bigger wheels also mean that the acceleration is slower and hill climbing is hindered. Be warned - this board will NOT climb a 12% hill with me on it (75 KG), not even talking about numbers mentioned on the page.

All in all I'm happy that I bought it as my first board, but I might be moving to something more powerful soon, because I live in an area full of hills and some of them are just too much for this board.

Are sturdy and lightweight

The rubber tires are truly a game changer, on mixed terrain the ride is smooth and I felt safer that on usual PU wheels. First time I went over grass, gravel and cobblestone i had a huge surprised smile on my face. Absolutely recommended if you have have to commute in cities where the pavement is not always concrete! 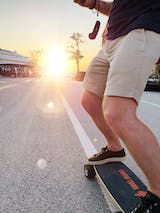 Rides smooth and fast - love it

Haven’t ridden them yet but based on their communication these should be great. Had s problem with delivery and the kept me updated the whole time. Great customer service!

FREE SHIPPING ON ORDERS OF $100 OR MORE

Let customers speak for us

The front wheels are just as expected. They are large, have tyre-like rubber, runs wheel on gravel, a bit weighty. I'm pretty sure the rim is made of aluminium. NB: as advertised, they do not come with ball bearings.

I bought the engines alone, I'm happy, the engines are quieter, the eraser can erase the roughness of the road, better grip, but some points can be improved as delivery time, customer communication, the design of the tire that vibrates at low speed, but I have filled the furrows of the tire to eliminate the unpleasant vibration at start-up and braking. Satisfied but Product to optimize

R
SKULLBOARD S2 Electric Skateboard R.R.
I am very happy with the board

I am very satisfied with the board, only the delivery time of over 6 weeks was very long and driving directions forwards and backwards are reversed.